Bounded task flows are natural building blocks of modular Oracle ADF applications. A bounded task flow facilitates the isolation of specific implementation details in its own memory scope - a page flow scope. For example, a managed bean  in pageFlow scope has a lifespan of its bounded flow.

The other commonly used building blocks in ADF application are data controls and bindings. I assume, that readers are familiar with ADF facility of Bean Data Control: it is very easy to create one on any java class by doing Right-Click->Create Data Control on it.

This post shows a technique how to align a scope of java bean defined as manged bean in pageFlow Scope with an instance of the same bean exposed as bean data control.

The sample, available to download and run in JDeveloper R2, shows the technique and one particular  usage scenario of it.

Short description of the sample application

An entry point to the sample is home.jsf.  The page contains a bounded task flow sample-task-flow, embedded as a region.  There are  two view activities defined in the sample-task-flow:  first and second. There is one method binding doSomethingUseful, which gets executed on transition between them:

Therefore , it can be used a declarative way and provides the same rapid design time experience ADF developers are likely familliar with.

The run time functionality provided by ADF Model, like currentRow and implementation of CollectionModel etc. is still available, so the combination of java and ADF enables to design highly modular service oriented view and controller layer and implement it using the strenghts of both approaches - declarative and java centric one.

The bindings section of the page definition ,created implicitly by JDeveloper:

The method doSomethingUseful() was dragged&dropped on a flow diagram, so an appropriate pageDefinition file was also created implicitly, which looks like this:

The page second.jsff doesn't contain a page definition. It is aimed to show, that the instance of  flowController managed bean and its attributes can be used directly "JSF" way.
We pick a value of bean attribute sampleValue in JDeveloper Expression Builder. The bean  flowController is accessible in a section ADF Managed Beans: 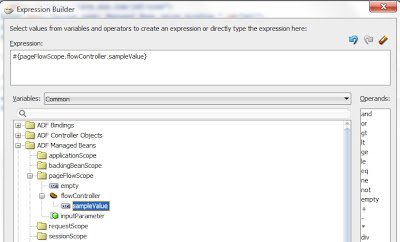 And a value expression of inputText element on a page looks like this:

Lets start the sample to have a look at behavior of it.

Once we start it (run home.jsf), ADF managed bean facility creates an instance of flowControler managed bean in a flow scope. We provide some value for the inputText element:

Click on Go to the next  page and perform something useful  -  navigation case next to the second page is performed and a method doSomethingUseful() gets executed on a way to it.
The text on a second page is now converted to upperCase (it is aimed to show some useful functionality provided by the method):

We modify the text a little bit:

and press Go back to the first page. The result shows our modified value available on a first page:

It is supposed to show, that the scope of controller bean, defined as a managed bean in a page flow scope and exposed as bean data control is aligned.
The same instance of flowController bean is used, regardless of the way a bean is bound to some elements in a flow and pages of it.


To finish the post, i provide a complete source code (basically one line of code and one naming convention do the job) for the flow scoped data control  used in a sample.

And a generic implementation of base class FlowScopedDataControlBase.java for all flow scoped data controls:


The sample JDeveloper R2 workspace is provided at github.
Posted by Donatas at 7:34 PM